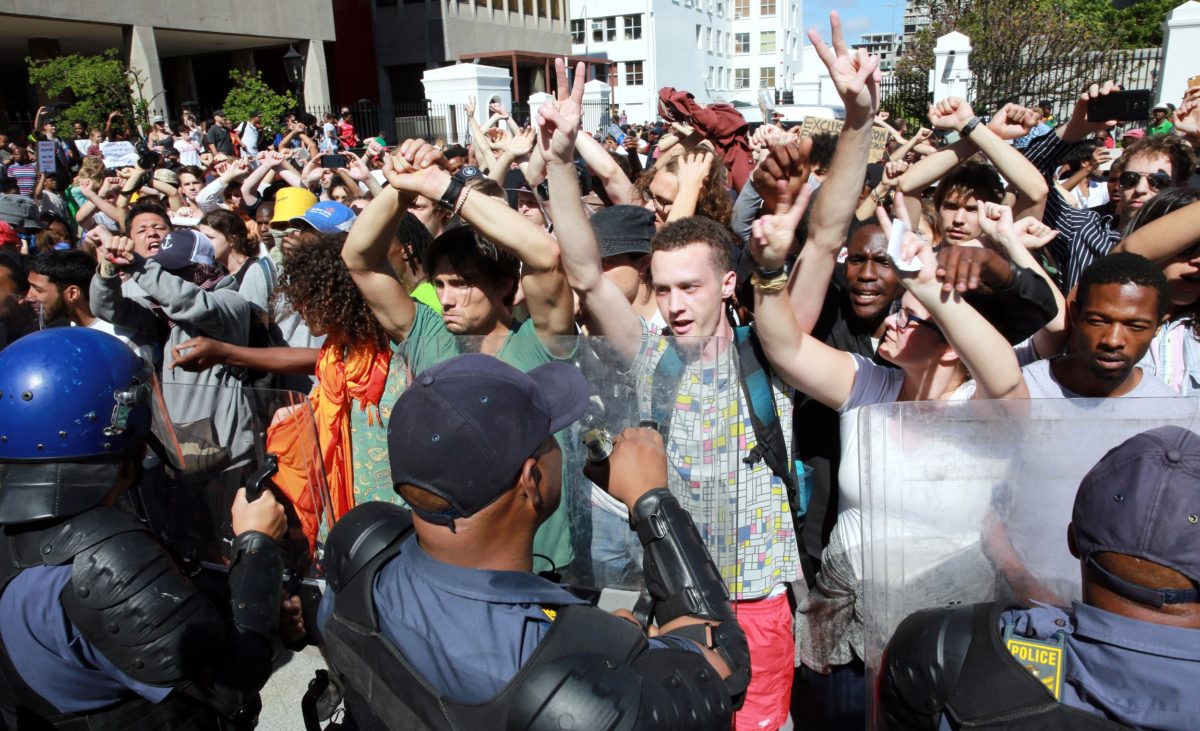 Teboho Pitso: History calls for the decolonisation of education

“The will to believe signals the end of questions and knowledge.”

One of the key demands of recent student protests in South Africa is the need for universities to transform curricula in such a way as to provide students with decolonised, quality education.

There are many facets to this issue of a decolonised, quality education and I seek to make a modest contribution to this debate by focusing not only on the merit of such an endeavour, but mainly on how a sense of history would help restore some confidence in our students that Africa had also made some huge contribution to this universal, scientific knowledge. This would probably mitigate the alienating conditions of university classrooms for black students.

I would, however, like to begin by determining whether there is any worth in learning this science knowledge. Why, by making it appear mostly Eurocentric and depriving it of a historical perspective, have universities been implicitly complicit in driving an ideological and political agenda?

Jurgen Habermas, a German philosopher, identified three benefits that a society could derive from scientific knowledge as technical, practical and emancipatory.

The technical aspects of knowledge help society to control and predict the environment in such a way as to exploit it to create human conveniences. It refers mostly to the use of science knowledge and natural resources to develop products and services (the economic aspect) that ease human existence.

The practical interests we have on knowledge relate to the need for science knowledge to help us develop a cohesive and functional society that is stable and productive. His basic argument is that once a society becomes unstable and characterised by violence and unrest, then such a societal failure results from interactions that are mostly not driven by science knowledge, or where science knowledge has been deliberately distorted or ignored.

The emancipatory aspects of knowledge refer to what students and society can legitimately access from education to free themselves from ignorance, dogmatism, bigotry and native selfishness. Emancipatory knowledge makes students and society access the means to critical understanding of complex issues and the means to explore new possibilities. This is one aspect of science knowledge that has generally been eschewed and ignored in university education, and especially access to the means of exploring new possibilities which talks to the development of students and general society’s creative problem-solving and innovative abilities could only be accessed through exploration of new possibilities.

Our university education has thus over-accentuated the technical aspects of knowledge (preparation for formal employment through skills and competencies development) and under-emphasised the emancipatory aspects of science knowledge (exploration of new things).

My sense is that this is where quality in university education is put to the test and where universities become complicit in driving a neo-liberal economic and political ideology, narrowly focused on developing employable graduates and less on developing students that can devise new or improved things.

Our universities are thus strong on developing reproductive, rather than productive thinkers (creators and innovators), especially at undergraduate levels and hence have become the main drivers of the epistemology of mimesis (replication of what is already known to the discipline, but mostly unknown to students).

There is almost always no expectation in disciplines that students could contribute to this already known knowledge by means of sensing its limits in real contexts. Learning becomes distant from real life student experiences and distances students from their heritage and self-pride. In this way, learning becomes the means to control and predict student behaviour to a point where universities become impotent when students act outside these expected behavioural precepts.

Few universities read students protests correctly and few sought to find out what Habermas discovered in the 1970s about students protests as the search for the higher design of university models, ranging from their funding, visions, strategies and curriculum provisioning. Habermas also attacked violent student  protest as self-delusory and pernicious, but accentuated their search for a better, improved university model that emancipates students, and doesn’t  condemn them to mundane workplace activities and societal assemblies bereft of active agency and critical engagement.

As I earlier stated, my modest contribution to decolonised university education relates to a sense of history which has generally been ignored in science and engineering education. For instance, the discovery of the fundamental laws of physics did not occur during Isaac Newton time, as is the popular belief in physics and general society. Avicenna (Ibn Sina), an Arabian, recognised that objects remained at rest or moved in a constant speed in a straight line until an external, unbalanced force was introduced to change their course. This was in the 10th Century, almost 600 years before the birth of Isaac Newton, during the Golden Years of Arabian Civilisation and during the time when Europe was experiencing high levels of inferiority.

This historical omission was entrenched when Isaac Newton named these laws of motion under his name. Another significant omission in our education is on the origins of chemistry. Chemistry is derived from the word “khemeia”, meaning black, and khemeia has generally been associated with Egypt, which is where chemistry originated as Egyptians tried various chemical reactions to try and mummify bodies of dead, but significant, Egyptians. This chemistry knowledge was adopted in Europe many years later for the sole purpose of trying to produce gold by chemical means, which is a project that failed dismally.

Europe, however, played a significant role in moving chemistry from alchemy to objective science. There are many other examples of knowledge that was produced in Africa, the Middle East and other places which has been claimed as European knowledge and packaged ideologically so as to undermine the contribution of other nations to science knowledge, and drove the myth that most science  knowledge derives from Europe. In engineering and mathematics, for instance, there is rarely a mention of Imhotep, an architect, engineer and physician that lived in Egypt in the 27th Century and who shaped these fields of Science.

Imhotep is one of the trailblazers in using science discoveries to produce human conveniences in the former of aesthetic and architectural taste which is a definition of engineering whose core is to devise or come up with new or improved things that improve human life. This means that the core of engineering education is access to the means of exploring new possibilities and devising new or improved things which highlight the value of creativity and innovation, even in undergraduate university studies.

It is also rarely mentioned that Pythagoras, a European, studied Egyptian pyramids for almost 22 years to come up with the Pythagoras theorem in mathematics, and spent time learning in Egypt, India and other Middle East areas. In fact, the theorem named after Pythagoras was discovered in Egypt long before Pythagoras arrived there. The Rhynd Papyrus dating back to 1650 BC provides evidence of the influence and sophistication of Egyptian Mathematics in Accounting, Architecture and many other areas long before the Greeks who are credited with developing Mathematics. The Rhynd Papyrus contains 84 mathematical problems that include division, multiplication, addition, fractions, square roots and quadratic equations arranged in terms of arithmetic, algebra and geometry.

In theology, the religion formed in the 6th Century BC called Zoroastrianism actually introduced concepts such as heaven and hell, judgement day and a holy path upon which Judaism, Islam and Christianity were to be founded, and has literally been wiped out. It originated in the Middle East.

The restoration of historical trajectory of science knowledge in our curriculum would probably make a significant contribution in making our students appreciate and critically engage knowledge, rather than becoming its passive recipients. This would also compel more systematic investigation of knowledge and its origins, which could lead to students’ active agency in forming and becoming educated, beyond just focus on turning them into workers. University education is more than that. It has to become emancipatory and contribute to the democratic project of enhancing interaction through active engagement and critical debate, which would include debating meanings and origins of science knowledge, hence notions of decolonised education would become clearer.

It is my contention that such university education would have to include access to the means of exploring new possibilities, once the means of critical understanding of complex aspects of science knowledge (origins, trajectories, current strengths and weaknesses) have been accessed beyond just this science knowledge’s trite transmission and absorption as neutral and unproblematic, as is the case in most undergraduate studies in our universities.

The call for quality, decolonised university education is the call to search for higher designs of our university education and curriculum provisioning. It is not, in my view, a call to reject any form of science knowledge, but to critically engage it and creatively contribute to it as myths are debunked by a strong sense of history.  The call is thus legitimate and should be critically engaged, not quashed by police force.

We should as universities embrace newness when our familiar milieu is made strange by student protests and remember TS Elliot wise counsel that “the end of all our exploring will be to arrive where we started and know the place for the first time”. This, in essence, means the defeat of ignorance, dogmatism and bigotry in a place we all call a scholarly home.

Louise Brits: Ordinary citizens can make all the difference